Saint Columba (Irish: Colm Cille, 'church dove'; 7 December 521 – 9 June 597) was an Irish abbot and missionary credited with spreading Christianity in present-day Scotland. He founded the important abbey on Iona, which became a dominant religious and political institution in the region for centuries. He was highly regarded by both the Gaels of Dál Riata and the Picts, and is remembered today as a Christian saint and one of the Twelve Apostles of Ireland. 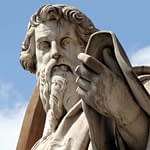 Most Holy Name of Jesus

So great is the Most Holy Name of Jesus that God highly exalted Him and gave Him the Name that is above every name
St Paul the Apostle
Phil 2:9-11
(Edit)

No heart which will not soften

there is no heart which will not soften and open in tears at this holy name.
St Bernard of Clairvaux (1090-1153)
Doctor of the Church
(Edit)

[Have] A mind prepared for red martyrdom [that is death for the faith]. [Have] A mind fortified and steadfast for white martyrdom. [that is ascetic practices]
(Edit)
View All Previous Next